Congratulations to the entire GenR8 Change community for winning top honors in the ‘Supporting Healthy Population’s’ category at the Department of Health and Human Services Victorian Public Healthcare awards! The joint application between GenR8 Change and SEA Change Portland received the award in Melbourne on October 11.

GenR8 Change was one of four finalists nominated for the category, up against three city/metro counterparts our Southern Grampians community should be rapt to achieve top honors.

This award represents all the hard work Southern Grampians community members have put in to make a real difference to the health of our community. The win reflects the fantastic level of community ownership over and support for GenR8 Change. 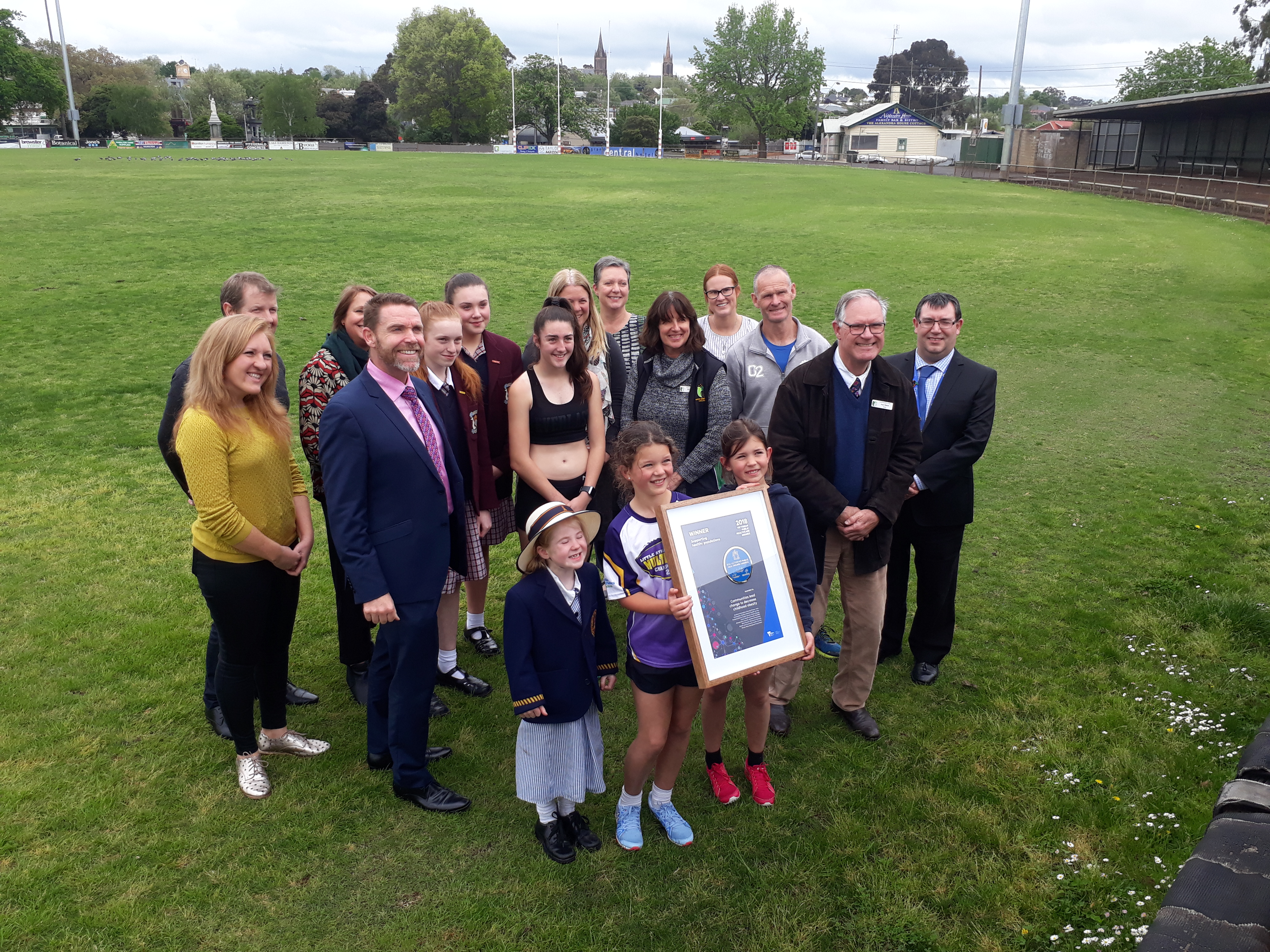 Southern Grampians Glenelg Primary Care Partnership Executive Officer Janette Lowe said the win was something the whole community could be proud of.

“This award is great recognition of the important role that everyday community members have, in making a real difference to the health and wellbeing of our community. Local communities have the power and skills to make a real difference and this win reflects the high level of community ownership over GenR8 Change” said Ms Lowe.

“Together the Southern Grampians community has made hundreds of changes, big and small, to make the healthy choice the easier choice and ultimately improve the health of our local children.  Recently collected childhood health data is showing the distinct reduction in obesity rates and improvement in a number of childhood health indicators since GenR8 Change began.”

Local Principal, Don Beaton recognises the value in the GenR8 Change approach and has leveraged this to make healthy change to his schools lunch menu. "The GenR8 Change movement gave us the confidence and support to change our school's lunch order menu. The students are generally excited about new healthy choices”, Don says, “It’s great to know other community groups are also making change and we’re starting to get some really good outcomes”.

Whether you’ve been directly involved in an action to make the healthier choice the easier one, or you’ve simply supported healthy change in some way, thank you. Remember – every little change counts!

If you haven’t yet been involved in GenR8 Change, and would like to learn more or follow community happenings please join at https://www.genr8change.com/join

Making the healthier choice the easier choice, can you help?

There are plenty of ways YOU can get involved in making change and showing support for healthier choices!   In addition to showing your support through joining the GenR8 Change community (join in 1 minute now!) , there are always ways to go that step further and become a part of the changes you want to see across the Southern Grampians.    Recently, some of the GenR8 Change community gathered informally to discuss some of the fantastic healthy changes that have happened in our community, and share ideas for further action. There were a number of new actions proposed at the session, and now we put the call out to you to jump on board!! Reach out to the key contacts assigned to each of the actions below, or alternative contact Ebony at [email protected] or 5551 8475.                              Has your club, school or organisation achieved anything similar and able to provide some guidance or advice? Or have you previously thought about pursuing one of these changes (or similar) to make the healthier choice the easier one? Get involved in these action groups to make it a whole lot easier! Of course these are not the only actions happening in our community, there is upwards of 150 similar changes occuring! To find out more or let us know about a change you've noted please get in contact with Ebony at [email protected] or 5551 8475 - we'd love to share your story!

Social Network Analysis - What is it and how can it help GenR8 Change?

One key evaluation component of GenR8 Change is social network analysis (SNA). SNA reveals how change spreads within and beyond communities. SNA of our local GenR8 Change community will help us determine if the right mix of people are involved and connected to achieve our overall goal of sustained healthy systems change.   GLOBE @ Deakin University are currently seeking some information from key GenR8 Change community members that will feed into the analysis and build our local knowledge.   Whether you have been contacted previously to complete a SNA survey, OR the whole concept of Social Network Analysis in general interests you, you're invited to come along to an informal lunchtime session with Jaimie McGlashan from GLOBE as she shares with us; what SNA is used for, how it can benefit us locally and what future developments could look like. Anyone interested and keen to learn more is welcome! Be sure to RSVP if you do plan to attend for catering purposes.

Making the healthier choice the easier choice is having an impact!

Since GenR8 Change first came to fruition back in 2015 (yes, it's been that long!) our Southern Grampians community has worked hard in lots of settings, making changes big and small to shape an environment where the healthier choice is the easier one.    And guess what - your actions ARE making an impact!    Local weights, measures and behavioural data of children in grades 2, 4 and 6 was for a second time collated by Deakin University and local data collectors during term 2 of 2017. A great participation rate from our local schools enables us to draw upon this newly analysed credible data, as well as data collected back in 2015, and present you with some good news - rates of childhood overweight and obesity in the Southern Grampians are moving in a positive direction!    The info-graphic below shares some of the key data findings in regards to the range of health behaviours measured and the big one, Body Mass Index.    For those that like delving deeper into the facts and findings, never fear, Deakin University are working on producing publications that will include all the specific methods, facts and figures. But for now we're excited to be able to share this information with you! Whilst sharing of the new local childhood health data certainly does call for celebration, we all acknowldege there's a long way to go yet. Rates of childhood overweight and obesity across the Southern Grampians are still not acceptable.      Are you part of GenR8 Change? If not, the first step you can take to show your support is joining the GenR8 Change community at www.genr8change.com/join    Movement in a positive direction is great, but we can achieve so much more together! The approach is working, get on board!